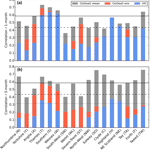 Abstract. Skilful winter seasonal predictions for the North Atlantic circulation and northern Europe have now been demonstrated and the potential for seasonal hydrological forecasting in the UK is now being explored. One of the techniques being used combines seasonal rainfall forecasts provided by operational weather forecast systems with hydrological modelling tools to provide estimates of seasonal mean river flows up to a few months ahead.

The work presented here shows how spatial information contained in a distributed hydrological model typically requiring high-resolution (daily or better) rainfall data can be used to provide an initial condition for a much simpler forecast model tailored to use low-resolution monthly rainfall forecasts. Rainfall forecasts (hindcasts) from the GloSea5 model (1996 to 2009) are used to provide the first assessment of skill in these national-scale flow forecasts. The skill in the combined modelling system is assessed for different seasons and regions of Britain, and compared to what might be achieved using other approaches such as use of an ensemble of historical rainfall in a hydrological model, or a simple flow persistence forecast. The analysis indicates that only limited forecast skill is achievable for Spring and Summer seasonal hydrological forecasts; however, Autumn and Winter flows can be reasonably well forecast using (ensemble mean) rainfall forecasts based on either GloSea5 forecasts or historical rainfall (the preferred type of forecast depends on the region). Flow forecasts using ensemble mean GloSea5 rainfall perform most consistently well across Britain, and provide the most skilful forecasts overall at the 3-month lead time. Much of the skill (64 %) in the 1-month ahead seasonal flow forecasts can be attributed to the hydrological initial condition (particularly in regions with a significant groundwater contribution to flows), whereas for the 3-month ahead lead time, GloSea5 forecasts account for  ∼ 70 % of the forecast skill (mostly in areas of high rainfall to the north and west) and only 30 % of the skill arises from hydrological memory (typically groundwater-dominated areas). Given the high spatial heterogeneity in typical patterns of UK rainfall and evaporation, future development of skilful spatially distributed seasonal forecasts could lead to substantial improvements in seasonal flow forecast capability, potentially benefitting practitioners interested in predicting hydrological extremes, not only in the UK but also across Europe.