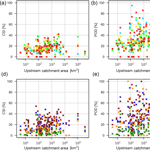 Abstract. Sufficient and accurate hydro-meteorological data are essential to manage water resources. Recently developed global reanalysis datasets have significant potential in providing these data, especially in regions such as Southern Africa that are both vulnerable and data poor. These global reanalysis datasets have, however, not yet been exhaustively validated and it is thus unclear to what extent these are able to adequately capture the climatic variability of water resources, in particular for extreme events such as floods. This article critically assesses the potential of a recently developed global Water Resources Reanalysis (WRR) dataset developed in the European Union's Seventh Framework Programme (EU-FP7) eartH2Observe (E2O) project for identifying floods, focussing on the occurrence of floods in the Limpopo River basin in Southern Africa. The discharge outputs of seven global models and ensemble mean of those models as available in the WRR dataset are analysed and compared against two benchmarks of flood events in the Limpopo River basin. The first benchmark is based on observations from the available stations, while the second is developed based on flood events that have led to damages as reported in global databases of damaging flood events. Results show that, while the WRR dataset provides useful data for detecting the occurrence of flood events in the Limpopo River basin, variation exists amongst the global models regarding their capability to identify the magnitude of those events. The study also reveals that the models are better able to capture flood events at stations with a large upstream catchment area. Improved performance for most models is found for the 0.25° resolution global model, when compared to the lower-resolution 0.5° models, thus underlining the added value of increased-resolution global models. The skill of the global hydrological models (GHMs) in identifying the severity of flood events in poorly gauged basins such as the Limpopo can be used to estimate the impacts of those events using the benchmark of reported damaging flood events developed at the basin level, though this could be improved if further details on location and impacts are included in disaster databases. Large-scale models such as those included in the WRR dataset are used by both global and continental forecasting systems, and this study sheds light on the potential these have in providing information useful for local-scale flood risk management. In conclusion, this study offers valuable insights in the applicability of global reanalysis data for identifying impacting flood events in data-sparse regions.