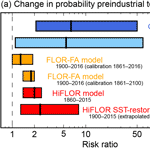 Abstract. A stationary low pressure system and elevated levels of precipitable water provided a nearly continuous source of precipitation over Louisiana, United States (US), starting around 10 August 2016. Precipitation was heaviest in the region broadly encompassing the city of Baton Rouge, with a 3-day maximum found at a station in Livingston, LA (east of Baton Rouge), from 12 to 14 August 2016 (648.3 mm, 25.5 inches). The intense precipitation was followed by inland flash flooding and river flooding and in subsequent days produced additional backwater flooding. On 16 August, Louisiana officials reported that 30 000 people had been rescued, nearly 10 600 people had slept in shelters on the night of 14 August and at least 60 600 homes had been impacted to varying degrees. As of 17 August, the floods were reported to have killed at least 13 people. As the disaster was unfolding, the Red Cross called the flooding the worst natural disaster in the US since Super Storm Sandy made landfall in New Jersey on 24 October 2012. Before the floodwaters had receded, the media began questioning whether this extreme event was caused by anthropogenic climate change. To provide the necessary analysis to understand the potential role of anthropogenic climate change, a rapid attribution analysis was launched in real time using the best readily available observational data and high-resolution global climate model simulations.

The objective of this study is to show the possibility of performing rapid attribution studies when both observational and model data and analysis methods are readily available upon the start. It is the authors' aspiration that the results be used to guide further studies of the devastating precipitation and flooding event. Here, we present a first estimate of how anthropogenic climate change has affected the likelihood of a comparable extreme precipitation event in the central US Gulf Coast. While the flooding event of interest triggering this study occurred in south Louisiana, for the purposes of our analysis, we have defined an extreme precipitation event by taking the spatial maximum of annual 3-day inland maximum precipitation over the region of 29–31° N, 85–95° W, which we refer to as the central US Gulf Coast. Using observational data, we find that the observed local return time of the 12–14 August precipitation event in 2016 is about 550 years (95 % confidence interval (CI): 450–1450). The probability for an event like this to happen anywhere in the region is presently 1 in 30 years (CI 11–110). We estimate that these probabilities and the intensity of extreme precipitation events of this return time have increased since 1900. A central US Gulf Coast extreme precipitation event has effectively become more likely in 2016 than it was in 1900. The global climate models tell a similar story; in the most accurate analyses, the regional probability of 3-day extreme precipitation increases by more than a factor of 1.4 due to anthropogenic climate change. The magnitude of the shift in probabilities is greater in the 25 km (higher-resolution) climate model than in the 50 km model. The evidence for a relation to El Niño half a year earlier is equivocal, with some analyses showing a positive connection and others none.