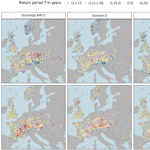 The European 2015 drought from a hydrological perspective

Abstract. In 2015 large parts of Europe were affected by drought. In this paper, we analyze the hydrological footprint (dynamic development over space and time) of the drought of 2015 in terms of both severity (magnitude) and spatial extent and compare it to the extreme drought of 2003. Analyses are based on a range of low flow and hydrological drought indices derived for about 800 streamflow records across Europe, collected in a community effort based on a common protocol. We compare the hydrological footprints of both events with the meteorological footprints, in order to learn from similarities and differences of both perspectives and to draw conclusions for drought management. The region affected by hydrological drought in 2015 differed somewhat from the drought of 2003, with its center located more towards eastern Europe. In terms of low flow magnitude, a region surrounding the Czech Republic was the most affected, with summer low flows that exhibited return intervals of 100 years and more. In terms of deficit volumes, the geographical center of the event was in southern Germany, where the drought lasted a particularly long time. A detailed spatial and temporal assessment of the 2015 event showed that the particular behavior in these regions was partly a result of diverging wetness preconditions in the studied catchments. Extreme droughts emerged where preconditions were particularly dry. In regions with wet preconditions, low flow events developed later and tended to be less severe. For both the 2003 and 2015 events, the onset of the hydrological drought was well correlated with the lowest flow recorded during the event (low flow magnitude), pointing towards a potential for early warning of the severity of streamflow drought. Time series of monthly drought indices (both streamflow- and climate-based indices) showed that meteorological and hydrological events developed differently in space and time, both in terms of extent and severity (magnitude). These results emphasize that drought is a hazard which leaves different footprints on the various components of the water cycle at different spatial and temporal scales. The difference in the dynamic development of meteorological and hydrological drought also implies that impacts on various water-use sectors and river ecology cannot be informed by climate indices alone. Thus, an assessment of drought impacts on water resources requires hydrological data in addition to drought indices based solely on climate data. The transboundary scale of the event also suggests that additional efforts need to be undertaken to make timely pan-European hydrological assessments more operational in the future.