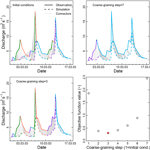 Abstract. This article introduces an improvement in the Series Distance (SD) approach for the improved discrimination and visualization of timing and magnitude uncertainties in streamflow simulations. SD emulates visual hydrograph comparison by distinguishing periods of low flow and periods of rise and recession in hydrological events. Within these periods, it determines the distance of two hydrographs not between points of equal time but between points that are hydrologically similar. The improvement comprises an automated procedure to emulate visual pattern matching, i.e. the determination of an optimal level of generalization when comparing two hydrographs, a scaled error model which is better applicable across large discharge ranges than its non-scaled counterpart, and "error dressing", a concept to construct uncertainty ranges around deterministic simulations or forecasts. Error dressing includes an approach to sample empirical error distributions by increasing variance contribution, which can be extended from standard one-dimensional distributions to the two-dimensional distributions of combined time and magnitude errors provided by SD.

In a case study we apply both the SD concept and a benchmark model (BM) based on standard magnitude errors to a 6-year time series of observations and simulations from a small alpine catchment. Time–magnitude error characteristics for low flow and rising and falling limbs of events were substantially different. Their separate treatment within SD therefore preserves useful information which can be used for differentiated model diagnostics, and which is not contained in standard criteria like the Nash–Sutcliffe efficiency. Construction of uncertainty ranges based on the magnitude of errors of the BM approach and the combined time and magnitude errors of the SD approach revealed that the BM-derived ranges were visually narrower and statistically superior to the SD ranges. This suggests that the combined use of time and magnitude errors to construct uncertainty envelopes implies a trade-off between the added value of explicitly considering timing errors and the associated, inevitable time-spreading effect which inflates the related uncertainty ranges. Which effect dominates depends on the characteristics of timing errors in the hydrographs at hand. Our findings confirm that Series Distance is an elaborated concept for the comparison of simulated and observed streamflow time series which can be used for detailed hydrological analysis and model diagnostics and to inform us about uncertainties related to hydrological predictions.