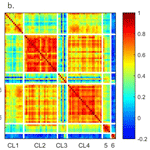 Abstract. Groundwater drought is a spatially and temporally variable phenomenon. Here we describe the development of a method to regionally analyse and quantify groundwater drought. The method uses a cluster analysis technique (non-hierarchical k-means) to classify standardised groundwater level hydrographs (the standardised groundwater level index, SGI) prior to analysis of their groundwater drought characteristics, and has been tested using 74 groundwater level time series from Lincolnshire, UK. Using the test data set, six clusters of hydrographs have been identified. For each cluster a correlation can be established between the mean SGI and a mean standardised precipitation index (SPI), where each cluster is associated with a different SPI accumulation period. Based on a comparison of SPI time series for each cluster and for the study area as a whole, it is inferred that the clusters are independent of the driving meteorology and are primarily a function of catchment and hydrogeological factors. This inference is supported by the observation that the majority of sites in each cluster are associated with one of the principal aquifers in the study region. The groundwater drought characteristics of the three largest clusters, which constitute ~ 80 % of the sites, have been analysed. There are differences in the distributions of drought duration, magnitude and intensity of groundwater drought events between the three clusters as a function of autocorrelation of the mean SGI time series for each cluster. In addition, there are differences between the clusters in their response to three major multi-annual droughts that occurred during the analysis period. For example, sites in the cluster with the longest SGI autocorrelation experience the greatest-magnitude droughts and are the slowest to recover from major droughts, with groundwater drought conditions typically persisting at least 6 months longer than at sites in the other clusters. Membership of the clusters is shown to be related to unsaturated zone thickness at individual boreholes. This last observation emphasises the importance of catchment and aquifer characteristics as (non-trivial) controls on groundwater drought hydrographs. The method of analysis is flexible and can be adapted to a wide range of hydrogeological settings while enabling a consistent approach to the quantification of regional differences in response of groundwater to meteorological drought.