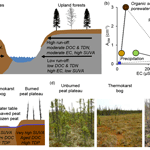 Abstract. Boreal peatlands are major catchment sources of dissolved organic carbon (DOC) and nutrients and thus strongly regulate the landscape carbon balance, aquatic food webs, and downstream water quality. Climate change is likely to influence catchment solute yield directly through climatic controls on run-off generation, but also indirectly through altered disturbance regimes. In this study we monitored water chemistry from early spring until fall at the outlets of a 321 km2 catchment that burned 3 years prior to the study and a 134 km2 undisturbed catchment. Both catchments were located in the discontinuous permafrost zone of boreal western Canada and had  ∼  60 % peatland cover. The two catchments had strong similarities in the timing of DOC and nutrient yields, but a few differences were consistent with anticipated effects of wildfire based on peatland porewater analysis. The 4-week spring period, particularly the rising limb of the spring freshet, was crucial for accurate characterization of the seasonal solute yield from both catchments. The spring period was responsible for  ∼  65 % of the seasonal DOC and nitrogen and for  ∼  85 % of the phosphorous yield. The rising limb of the spring freshet was associated with high phosphorous concentrations and DOC of distinctly high aromaticity and molecular weight. Shifts in stream DOC concentrations and aromaticity outside the early spring period were consistent with shifts in relative streamflow contribution from precipitation-like water in the spring to mineral soil groundwater in the summer, with consistent relative contributions from organic soil porewater. Radiocarbon content (14C) of DOC at the outlets was modern throughout May to September (fraction modern carbon, fM: 0.99–1.05) but likely reflected a mix of aged DOC, e.g. porewater DOC from permafrost (fM: 0.65–0.85) and non-permafrost peatlands (fM: 0.95–1.00), with modern bomb-influenced DOC, e.g. DOC leached from forest litter (fM: 1.05–1.10). The burned catchment had significantly increased total phosphorous (TP) yield and also had greater DOC yield during summer which was characterized by a greater contribution from aged DOC. Overall, however, our results suggest that DOC composition and yield from peatland-rich catchments in the discontinuous permafrost region likely is more sensitive to climate change through impacts on run-off generation rather than through altered fire regimes.