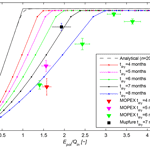 Does the Budyko curve reflect a maximum-power state of hydrological systems? A backward analysis

In a top-down approach we derived mathematical formulations of the relation between relative wetness and gradients driving run-off and evaporation for a simple one-box model. We did this in an inverse manner such that, when the conductances are optimized with the maximum-power principle, the steady-state behaviour of the model leads exactly to a point on the asymptotes of the Budyko curve. Subsequently, we added dynamics in forcing and actual evaporation, causing the Budyko curve to deviate from the asymptotes. Despite the simplicity of the model, catchment observations compare reasonably well with the Budyko curves subject to observed dynamics in rainfall and actual evaporation. Thus by constraining the model that has been optimized with the maximum-power principle with the asymptotes of the Budyko curve, we were able to derive more realistic values of the aridity and evaporation index without any parameter calibration.

Future work should focus on better representing the boundary conditions of real catchments and eventually adding more complexity to the model.

The requested paper has a corresponding corrigendum published. Please read the corrigendum first before downloading the article.